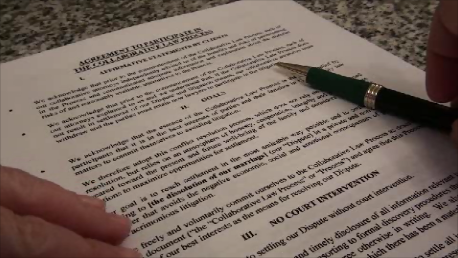 The efforts to create the proposed UCLA started years ago and the Chicago Daily Law Bulletin previously highlighted the early efforts:

“Developments are under way on two fronts that should lead to more widespread acceptance and use of the collaborative practice of law, experts say.

Collaborative lawyering involves negotiation and mediation, usually in a divorce matter, that is intended to  keep a case out of court.

One perceived hurdle is a concern that lawyers who agree in advance not to go to court may have an ethical conflict.

But the American Bar Association's Standing Committee on Ethics and Professional Responsibility has issued an ethics opinion placing its imprimatur on the practice. The ethics opinion found that collaborative practice does not create an inherent conflict of interest for lawyers.

”The structure creates a problem-solving atmosphere with a focus on interest-based negotiation and client empowerment,” the ABA committee's opinion states.

The second possible hindrance is the state of the law related to such practices. The National Conference of Commissioners On Uniform State Laws is working on that, and has begun drafting a Collaborative Law Act.

”Like mediation, collaborative law helps parties resolve their disputes themselves rather than having a ruling imposed upon them by a court or arbitrator,” a prefatory note in a preliminary draft of the act said. ”The distinctive feature of collaborative law is that parties are represented by counsel during the negotiations that make up the collaborative law process.”

The act ”will add uniformity between the states so all of the state practitioners are playing by the same rules,” he said.

Richard H. Marcus, director of the Family Law Clinic at the Chicago-Kent College of Law, said, ”I think [collaborative law is] something that may be helpful to litigants and parties. I think it's something that will develop more significantly in the future.”

James H. Feldman, a Jenner & Block LLP partner who chairs the firm's Family Law Practice, said the dual developments are likely to fuel the growth and development of the collaborative law process in Illinois and elsewhere.

”The ABA ethics opinion concludes that collaborative law is a permissible type of limited engagement and does not present a non-waivable conflict of interest by requiring an advance agreement for the attorneys to withdraw if the process fails to achieve settlement,” Feldman added. ”Having a uniform act will naturally help establish uniform standards and practices among the states and serve to better inform the public about this alternative, which thus far in this country has had its greatest use and success in the divorce area.”

Vivien C. Gross, a Chicago-Kent law professor who teaches professional responsibility, said, ”I don't think there's anything ethically impermissible about” the collaborative practice of law. ”It's a self-selecting clientele that's going to do this,” Gross added.

The ABA ethics opinion conflicts with an opinion

issued earlier this year by the Colorado Bar Association. But the ABA's version is in line with ethics opinions from a handful of other states, including Pennsylvania, New Jersey, Kentucky and North Carolina.

The ABA ethics opinion is ”a major decision that adds viability and credibility to the collaborative movements and should put to rest all of the discussion about whether the practice is ethical,” Galvin said.” Contact us to learn more about how Illinois Collaborative Divorce Moves Mainstream